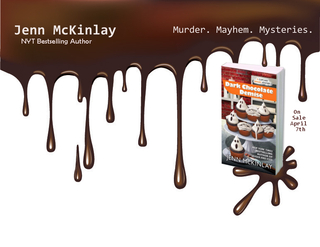 EVENTS: On May 9th, I will be at the Poisoned Pen for Death on Demand: A Gala Celebrating the 25th Death on Demand Mystery by Carolyn Hart. Very exciting!

CONTEST: To make it simpler, I now have a Wednesday Giveaway every (yes, you guessed it) Wednesday on my facebook page. This week's is a really good one as I'm giving away signed copies of DARK CHOCOLATE DEMISE and a squishy cupcake stress ball!

WHAT'S ON MY MIND:
Back in 2012, my house suffered an infestation. No, it wasn’t mice or bugs or uninvited guests, rather it was…wait for it…ZOMBIES!!! Yes, you read that right. With two tween aged males in residence suddenly everything was coming up undead.

I am not sure what it was about zombies that so captured my hooligans’ imaginations but hours were spent planning and mapping detailed escape routes, rendezvous points, and the best defense strategies in hand to hand combat with a zombie, which was to be avoided at all costs, but as the hooligans explained it these things happen and preparation was key to survival.

The Hub and I did our best to ride out the zombie storm with varying levels of amusement, alarm, intrigue and, yes, horror. After months of watching the hooligans perch in their climbing tree with their Nerf arsenal, practicing maneuvers for when the horde arrived, we figured the best way to deal with their interest was through full immersion.

Every year the city of Phoenix is host to a zombie walk, which ends with an outdoor screening of Night of the Living Dead. Hub and I read about the event and agreed it was time to get our zombie on, although we were going to pass on the movie, because, yeah, I’m a big chicken.

Yes, it's true. Confession time: I don’t like horror movies, monster movies, or anything that makes me jump and yell or both. I’m well past the age of being afraid of the dark but, yeah, still afraid. It doesn’t make me as skitter-jittery as it did as a kid, but if I read something scary, I can still make myself shiver if I force myself to look outside at night. And, yes, I have been known to run and make a flying leap into bed and pull the covers up over my head because as we all know bed sheets are magical and keep the monsters out. Eep!

In any event, the zombies were not to be denied and the four of us spent the morning making our costumes and donning our make-up, trying to look as ghoulish as possible. When we arrived at the meet up for the zombie walk, it was clear we had found our tribe.

The carnival of the undead swept us into their fold and we spent the afternoon playing with all of the brain oriented toys from the Science Center, having a paintball war with other zombified folks, and chomping on some brain shaped cookies. It ended up being one of our most fun family outings. After all, the family that shambles together, well, you get the idea.

The local comic bookstore took our picture, and it’s still my favorite family portrait, sunken eyes, oozing wounds, green hair and all. While the hooligans enjoyed antagonizing the Department of Zombie Defense and the Hub bobbed his head to the zombie eighties cover band, I sat back and watched the horde. Truly, it was an all the brains you can eat buffet of awesomeness that took root in my skull as the perfect back drop for a murder mystery, natch.

And so the seventh Cupcake Bakery mystery, DARK CHOCOLATE DEMISE, was born finding Mel and Angie in a fresh batch of trouble. Scottsdale, Arizona, may not be the liveliest place on earth, but it’s never been as dead as this. Hundreds of fans have gathered together for the first annual Old Town Zombie Walk, and Mel, Angie, and the Fairy Tale Cupcake crew are donning their best undead attire to sell some horror-themed desserts to the hungry hordes.

But the fun turns to fright when Mel finds a real dead body in a prop casket outside of the bakery’s truck—and the corpse looks alarmingly like a zombie of their own. Knowing that Joe, Angie’s brother and Mel’s former flame, has been working on a dangerous mob case, Mel worries that the murder is a hit gone wrong and that someone near and dear was the real target. To keep any of her friends from winding up six feet under, Mel will do whatever it takes to find a killer—no matter how scary things get...

So, go get your zombie on and come with me on the latest adventure of the cupcake gang! Happy Reading!
Jenn

Bonus: A ghoulish recipe from Dark Chocolate Demise as seen on the cover of the book

Marshmallow Mummies: Chocolate cake with a marshmallow filling with vanilla icing piped to look like mummy bandages with two candy eyes peeking out.

Directions: Preheat oven to 325 degrees. Line 24 muffin tins with cupcake liners and set aside. In a medium bowl, whisk together flour, baking soda, baking powder, salt, and set aside. In the bowl of an electric mixer fitted with the paddle attachment, cream together the sugar and butter until light and fluffy. Add chocolate and beat on medium speed until well combined. Add eggs, 1 at a time, mixing well after each addition. Add sour cream and vanilla and mix until well combined. With the mixer on low speed, add the flour mixture and water, alternating between the two. Beat until just combined. Fill prepared muffin cups 3/4 full with batter. Transfer to the oven and bake for 20 minutes, or until a toothpick inserted into the center of a cupcake comes out clean. Rotate the cupcake pans halfway through for even baking. Let cool completely before filling. Makes 24.

Directions: In a small bowl, combine the hot water and salt, stir until dissolved. Set aside to cool. In a large bowl, beat the marshmallow cream, shortening and vanilla until fluffy. Gradually add the sugar and the salt water mixture. Beat again until fluffy. Using a melon baller, scoop out the center of the cooled cupcakes and put the scoops of cake aside. Using a pastry bag, fill the bag with the marshmallow filling and insert into the hole in the cupcake. Gently squeeze the bag to fill each cupcake and replace the scoop of cake in the hole to seal the marshmallow filling inside.