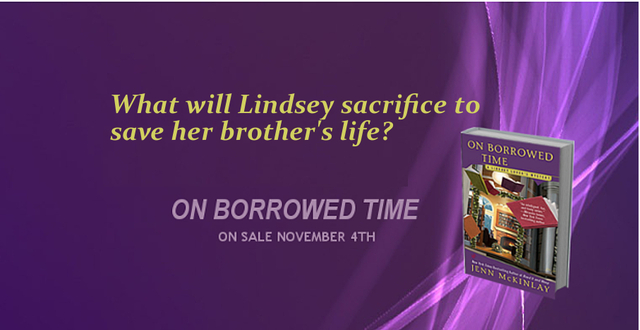 Book News: ON BORROWED TIME hits the shelves on Nov 4th!!! This is my 20th mystery which is amazing to me. I can’t thank you all enough for enjoying the books and joining me on this publishing journey. Truly, you are the best readers ever!

Event News: To celebrate the release of book #20, I will be signing ON BORROWED TIME at the Poisoned Pen in Scottsdale on Nov 8th at 2 pm.
Also, I will be headed to Long Beach, CA to attend my very first Bouchercon (mystery lover’s conference) from Nov 13th-16th.

Contest: Yes, we’re kicking off some more! First there is a Goodreads Giveaway from Friday, the 17th thru Tues the 21st. Then on Tuesday the 21st, the BIG contest for signed copies of the first three books in my Jenn McKinlay series and a nifty pen and book bag set will begin, oh, and as an extra I’m throwing in an early copy of On Borrowed Time! Go to the contest page on my website for details!

What’s on my mind: Failure. We all know it’s like zucchini or doing push-ups, good for you but not very yummy or fun. I don’t care what recipe is supposed to make zucchini taste better. Bleck! And I hate push-ups! Still, I eat zucchini and I do push-ups and I fail. I’m pretty good at all three, but I excel at failure because it’s important. Yes, even more important than zucchini or push-ups and apparently it’s genetic.

One of my hooligans recently came home from an event in which he had competed. During the testing, his mind had done that lovely panic thing where it goes blank and there is no muscle memory or any memory to draw from. He did the best he could but feared failure was looming. It was particularly painful because he had studied and practiced extra hard.

Hub and I knew it had gone horribly wrong when he went straight to his room and shut the door, requesting to be left alone. My mama antennae was going berserk and it was all I could do to honor his request. Okay, yes, the Hub had to sit on me for a bit but finally when we agreed he’d had enough time to process, I went to check on him.

I was allowed in. No small feat now that we’ve entered the tween years and zombie and superhero posters glare at me and warn me away from his adolescent sanctuary. I found my hooligan supine on his bed, staring at his ceiling. I reclined next to him and stared at the ceiling with him. I asked if he wanted to talk about it and he said no.

Clearly, he was willing to have company but not conversation, at least not direct conversation. Of course, this is a huge problem for me because I like to verbally analyze data pretty much until my equipment gives out. As Hub says, I have a talking problem.

Finally, I cracked and said, “You know what I wish for you?”

“That I don’t fail,” he mumbled. He made it sound as if I were wishing for the impossible like the ability to turn invisible or fly.

“No,” I said. “Actually, I want you to fail.” He gasped and I continued, “I also want you to have your heart broken and to know real poverty.”

The boy turned and gave me the hairy eyeball. “You know that’s not normal, right? I’m pretty sure normal parents don’t wish that for their kids.”

He was quiet for a moment and then asked, “How poor?”

“Pretty poor,” I said. “Like cashing in your change jar for groceries poor.”

“Were you ever that poor?”

“Daddy and I bought our first Christmas tree together out of our change jar,” I said. “Best tree ever.”

We contemplated the ceiling some more.

“I still say other parents don’t say these things to their kids,” he said.

“Maybe,” I agreed. “Have you decided what you’re going to do?”

“How will I know what I’m made of if I quit?” he asked. Then he grinned.

See? Failure is important. When I was six, I wanted to be a singer. I would sing and sing and sing, dreaming of the day I was filling stadiums with clamoring fans. I was in a variety of choirs all through school, but it soon became apparent that I was not all that. It was a heart wrenching fail and I quit. When I went to college I decided to be an artist. I doodled a lot but really did not have an original thought in my head. It was another personal fail and I quit again. Then, I latched onto writing. I failed at it for a solid eight years, but it was the one passion I refused to quit. Somehow I knew deep down that this was what I was supposed to do. By trudging forth amid a wasteland of rejection, I did figure out what I was made of – pretty tough stuff and a whole lot of stories. I’m just beginning to think I’m okay at this wordsmithing thing, but I have a long way to go to really master my craft and I am absolutely fine with that.

Recipe: To celebrate the release of ON BORROWED TIME, here’s one of my fave recipes from the back of the book. I bake these cookies every year, mostly for me, but truly they are super tasty!

Preheat oven to 375F. Grease a large cookie sheet. In a large bowl, combine flour, baking soda, salt, and set aside. In another large bowl, with mixer on low, beat brown sugar, butter, and shortening until blended. Add egg and mix until creamy. Add flour mixture, prunes, raisins, cherries and coconut until just blended. Drop dough by rounded teaspoonfuls onto cookie sheet two inches apart. Bake 10-12 minutes until golden around edges. Allow to cool. Arrange cookies in one layer on a large sheet of wax paper. In a small saucepan, melt the white chocolate over low heat until smooth. Using a fork, drizzle white chocolate on top of all of the cookies and allow to set. Store in a tightly sealed container. Makes about 3 dozen.

Here’s wishing you all a glorious autumn and the joy of watching your failures turn into amazing successes! Thanks for being the very best readers a writer could ever have!