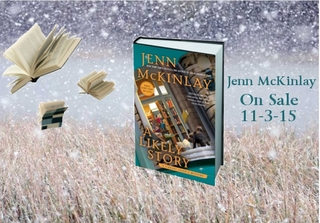 Books: My very first hardcover A LIKELY STORY will be released on Nov 3rd. I am super excited because the many libraries that don’t buy paperbacks will now be able to have a library lover’s mystery in their collection. Yay! It’s still on pre-order super sale at Barnes and Noble ($14.17) and Amazon ($13.72), so if you’re interested be sure to pre-order it while the sale lasts!

Contests: Every Wednesday, there is a book and prize giveaway on my Facebook page. Be sure to check in on Wednesdays and enter: https://www.facebook.com/Jenn-McKinlay-1414059082143302/timeline/

What’s On My Mind? A sense of self. When one of the hooligans became enamored with a historical video game where the characters wear jackets that look like they come from the Revolutionary War -- we’re talking brass buttons, wide cuffs, high collars and long tails – I wasn’t surprised that he wanted such a jacket for his birthday. I was surprised when he proceeded to wear it to school. I was certain this fashion independence would lead to bullying. He assured me that it wouldn’t, but even if it did, he didn’t care. He reminded me that I frequently told him not to let the opinions of others matter more than his own. As it turned out, he was right and everyone at school loved the jacket and it became one of the many “schooling the mom” moments the boys have given me over the years. Excellent.

Recently, the other hooligan decided to dye his hair blue. Yes, blue. The bluest blue you ever did see, like Smurf blue or blue M & M blue and not just a streak or his bangs. Oh, no, we’re talking his whole head in an electric shade of blue. Much like the jacket, Hub and I had no problem with this. We want the dudes to create their own identities and express themselves however they choose so long as it is respectful to others. I did caution him that other people might not be as a-okay with his hair style choice as we were and that he may find himself being teased.

My darling hooligan looked at me with one eyebrow raised higher than the other and said, “Why would I care what anyone else thinks of me? Don’t you always say 'the only opinion that matters is your own'?” Seriously, again with this? Yes, that little gem has come out of my cake hole repeatedly over the years but at the time I had no idea it was going to be put to the test with fancy jackets and blue hair. Oy! We dyed his hair and the tips of my fingers -- lousy gloves -- when it was done, it looked super rad. He was happy, I was proud of his creative independence, and his classmates loved it. Go figure.

Now here’s a funny thing, the only people who tried to make him feel small were adults. A few of his teachers gave him a hard time, some strangers felt the need to comment unkindly, and I asked him how he felt about it. He didn’t care! He was very clear that anyone who judged him by the color of his hair was undoubtedly someone who judges others by where they live, what they drive, the color of their skin, how much money they have, whether they’re pretty or not, etc. and so on. He said they weren’t his kind of people so their opinions did not matter. Smart kid.

Because I am his mom, I, too, received a lot of mixed reactions from adults over the hair. Lucky me! When I met a woman at the grocery store who approached me and asked the hooligan’s age, I prepared myself for yet another lecture about how could I let my boy do that to his hair, why aren’t I a better mother, yada yada yada, because I’ve noticed as a society we have become very judgy and much more likely to tear people down rather than build them up. Good thing this oak is a lot like her acorns and couldn’t care less what people think of me or mine. About this woman, however, I was completely wrong. As I mentally prepared my snappy comeback, she told me about her son. He had been just a little bit older than my boy, he had loved to dye his hair funky colors, and she had encouraged his free spirit.

Tragically, she told me her son had died from a terminal disease the year before. When she caught sight of my son out of the corner of her eye, she had a flash of memory about her son and was hit hard by how much she missed him and his blue hair. Then she started to cry and so did I. I hugged her right there in the middle of Fry’s, because I had no words of comfort. I couldn’t even imagine the pain of such a loss. When we pulled it together, wiped our eyes and blew our noses, she said she was glad I let my son develop his own sense of self. She said when she thought of her boy the one thing that brought her peace was that she had always encouraged him to be true to himself. “It’s so important,” she said.

Later, as I smothered both hooligans in hugs and kisses, I took several moments to be grateful that I was lucky enough to be able to kiss them and hug them. But I was also very glad that they both have a strong sense of who they are and what is really important in life. It is my greatest hope that nothing ever changes their sense of self, yes, even if it means Revolutionary style jackets, blue hair, or whatever else their creative souls come up with next.

As George Bernard Shaw said, "Life isn't about finding yourself; Life is about creating yourself."

So, here’s to creating the very best of ourselves in whatever form it takes!

Thanks for letting me visit with you and, as always, for being the best readers a writer could have.
~Jenn