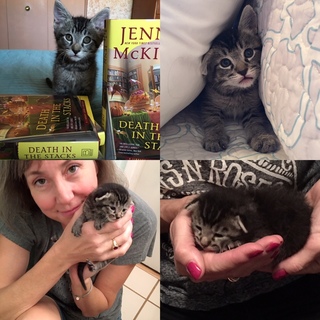 Book News: DEATH IN THE STACKS is out tomorrow Nov 14th!!! What’s so great about that? Well, it's the first book with all of the characters from the Cupcake Bakery series and the London Hat Shop series all within a Library Lover's mystery – it’s a murder mystery mash-up! I hope you enjoy reading it as much as I enjoyed writing it!

EVERY DOG HAS HIS DAY, which ironically -- see newsletter below -- includes a rescue kitten, comes out on January 2nd!

Also, e-book readers, a little bird said things will be happening with my books on BookBub, so be sure to follow me so you don’t miss any smokin’ hot deals: https://www.bookbub.com/authors/jenn-mckinlay

Contests: Every Wednesday on my Facebook page (Jenn McKinlay Author) there is a giveaway of books and swag. Stop by and check it out! This week I’ll be choosing readers who subscribe to this newsletter, so you’ll most definitely want to enter.

What’s on my mind? King George. For those of you who follow me on social media, you have undoubtedly been unable to avoid seeing the new addition to our family, known to one and all as King George. It has been quite an experience.

On Oct 1st, Hooligan 1 and I came home from a late evening run to the store. With two teenage boys in residence, I swear there is never any food in the house even when you know you just bought enough to feed a ravenous horde of zombies. While unloading bags, I noticed a small blob on the front patio. Since we live in a frat house, small blobs appear with great regularity but I had just swept the front porch so I was bewildered. Was it a clod of dirt? A rogue sock? One of the neighbor kid’s stuffies? I couldn’t see in the dim garden lights and asked Hooligan 1 to confirm. He used the flashlight app on his phone to help and as he shined the light on the blob, a tiny face rolled up to look at us. It was a teeny tiny kitten.

“Aw,” we said together. Then we stepped back to see if Mama was around. She wasn’t. Any others babies? Nope. The little guy was so pitiful and weak, we brought him inside. Hooligan 2 promptly elbowed us out of the picture and took over warming the little guy while Hooligan 1 and I made a supply run.

Hub and I discussed. Hub, being a big squishy marshmallow inside a burly knuckle dragger’s body, was instantly kitten smitten. The Hooligans were equally besotted. I was the holdout. I am the one who works at home and, quite frankly, is the one in charge of the walking and feeding and vet care of all the other pets. I knew this wee fella would be a lot of work, and I couldn’t imagine how we’d integrate him into a house with two cats, two dogs, and a fish who won’t die.

Sure enough, as my people trotted off to school and work the next day, I was left with this thumbprint of a kitten. I took him to the vet immediately. They told me, gently, that he would likely die. He was less than two weeks old, his body temperature was low, and he was scrawny. Oh, boy. They gave me all sorts of instructions – apparently, itty bitty kitties need to eat every two hours and you have to teach them to pee – no, not kidding. This kitten the size of a bug bite and I sat in the car where I promptly burst into tears. What if he died? How could I live with that? I was on deadline. I was going to a writer’s conference Canada. I couldn’t do this, sob, snuggle kitten, wail, snuggle kitten, etc.

I called a family meeting. I had the name and number of a kitten nanny who was willing to take him. I explained that I could not do this alone and that we had to make our decision for the fuzzy nugget based upon what would give him his best shot. The menfolk lobbied hard to keep him and raise him up ourselves. We talked about his schedule, everyone picked their shift. We all learned how to make his food and how to rub his nether regions to help him pee and poop (again, not kidding) and so it began.

The Hub and the Hooligans and I were all in. For as long as I live, I will double up with laughter at the image of the Hooligans helping George to pee and poop. The looks of “ew” that morphed into pride when the yelling kitten achieved bladder and bowel movements were truly a thing to witness. And the tenderness that filled my heart while I watched them bottle feed him, cuddle him, check on him, and love him -- truly, I overflowed with it. Then, of course, there were the admonishments of how I needed to tend him while they were away at school that made me see a new level of responsibility and maturity in them.

Side note: I don’t know if you’ve noticed but the world seems to have turned rather awful. It’s been a tire fire of vitriol and hatred and people behaving badly out there and, frankly, it had left me somewhat depressed over the past few months, thinking what is the world coming to and how will we all survive? But then this half dead, two-week-old abandoned kitten found us, and I stepped back to let the Hooligans take the lead on caring for him. They were absolutely determined that he would survive and thrive. While guiding them, I watched two young men committed to saving what to many would be a lost cause, a small inconsequential life of no importance, and I realized, we're going to be okay.

After the first two weeks, when we were pretty sure he was going to make it, we named him King George. He has become a solid member of our pack. Because he is now just eight weeks old, we’re still keeping him apart from our thirteen year old cats, Patsy and Loretta, and our eight year old dogs, Annie and Otto. They all hang out at the baby gate, which separates Georgeland (the master bed and bath) from the rest of the house, for now. But I am optimistic that in time the gate will go down, and he’ll be fully accepted into the fold.

When I think back to the day I cried, I laugh. As if there was any option but keeping this furball. But I’m also glad that I was overwhelmed by the responsibility and asked for help. I love that my boys have had an opportunity to parent, and I really love that saving this kitten from certain death is a bond the four of us will always share.

That’s my feel good story for the kick off to the holiday season! Thanks for letting me share and for always being the best readers a writer could have!