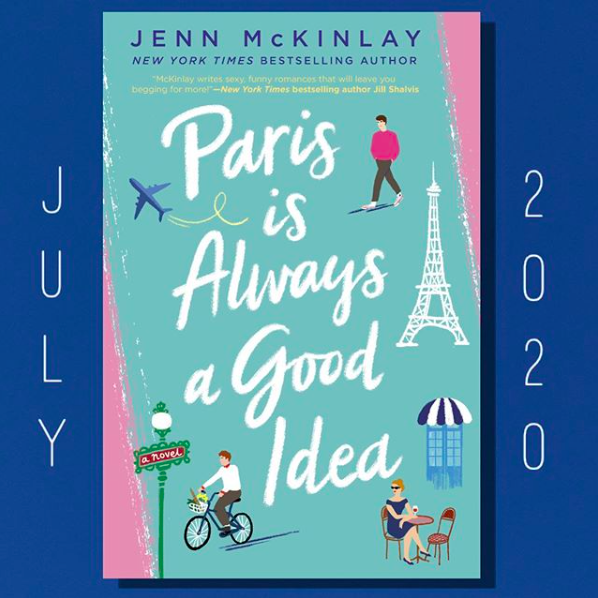 Book News: In just a few days, on July 21st, my first single title romantic comedy (think of the glory days of When Harry Met Sally and While You Were Sleeping) will be released!!! Paris is Always a Good Idea arrives as a bargain ebook for $9.99!!! or a trade paperback, which is perfect for Book Clubs, click for a printable book club kit.

One of Popsugar's Best New Books for Summer 2020, Paris is Always a Good Idea follows a thirty-year-old woman as she retraces her gap year through Ireland, France, and Italy to find love—and herself—in this hilarious and heartfelt novel. This book was a journey and I am so pleased to finally be able to share it with you!

Next up is the release of the eleventh Library Lover's mystery One for the Books on Sept 1st. Love is in the air in Briar Creek as library director Lindsey Norris and boat captain Mike (Sully) Sullivan are finally tying the knot, but when the man who is supposed to officiate their wedding is found murdered, will they make it down the aisle or will the killer strike again? And the cover on this book is to die for, no pun intended!

Events: Sadly, there won't be any in-person events happening, but I will be hosting a small Zoom Launch party on my FB page on July 21st at 8 PM, EST with my plot group besties, Paige Shelton and Kate Carlisle. Prizes will be given to commenters so come join the fun!

Also, I'll be joining my fellow Jungle Red Writers on a virtual visit with the Poisoned Pen Bookstore in August! Check out their calendar to see when!

Contests: There are so many giveaways happening right now with two books coming out on top of each other, there's much to share! I recently hired a dynamo assistant, Christie C., who keeps the party rocking!

Here are several ways to be in the loop with all of the shenanigans:

McKinlay's Mavens - hosted by Christie, this is a reader page for all things Jenn McKinlay! It's where you can get all the latest info and help spread the word about my books! It's a street team of super readers bonded by a love of stories, sugar, and laughter! Plus, lots of giveaways!

Fans of Jenn McKinlay - hosted by readers Kelly, Risa, and Heidi, this is a super social group of book lovers, who frequently have guest authors like Miranda James and Ellen Byron! They talk about the books they love, celebrate birthdays, and are wonderfully supportive of each other. A happy place to be, for sure. Plus, there's lots of giveaways and I do live chats with them as time permits!

Not a group person? I get it. Just follow me on social media or my website and you'll still get updates on the latest news and giveaways!

What's On My Mind? Lovebirds and sunflowers. The variety I'm thinking of are rosy or peach faced lovebirds, which are bright green birds with rosy cheeks and blue tail feathers. They are noisy creatures that squawk and chirp and screech when calling their feathered pals, and they get crazy excited over sunflower seeds right off the flower, particularly the mammoth sunflower.

Why am I thinking about them? Well, sometime in the 80's, someone's lovebirds got loose. They took to the dry climate of Phoenix like nobody's business and now every neighborhood seems to have their own rogue flock of rosy faced lovebirds. I promised my brother, during the long days of his Massachusett's winter, that I would plant some sunflowers in the spring to draw the lovebirds in so that I could show him. My brother loved his wild birds.

You'll note the past tense there. It hurts me to use it, but the fact remains that on a picturesque day in May, while talking to each other on the phone as my brother watched his wild birds and I tended my sunflowers, he was struck by a fatal pulmonuary embolism. The loss is beyond devastating. It has left me bereft and bewildered and, quite frankly, lost. Ridiculously, the one thing that kept popping into my head in the following days of shock and grief was that I never got to show him my sunflowers or the lovebirds who've become my constant companions as I sit on the patio and try to grasp this new reality that's been forced upon me.

Now I know I'm supposed to be talking about the new book that comes out next week. Truly, I've never worked as hard on any book as I did on Paris is Always a Good Idea. Why? Because, ironically, it's a story about life and loss, and trying to find your way out of grief. I had to dig deep to get it just right, never expecting that I'd be releasing a book about loss right after suffering the most profound loss I've ever known. Very on point for 2020.

So much of my relationship with my brother was poured into this novel - a brother and sister are key components to the story - that it's difficult to separate myself from this work when I feel as if my brother is on every page. Because of the pandemic, we haven't been able to have a proper service or mourn in all of the ritualistic ways that bring closure, like weeping together, sharing stories, or raising a pint to celebrate the life of a remarkable man. Brutal.

One thing I didn't expect was my need to speak about my brother. I think because we can't gather, I feel stunted. This inability to swap stories with all who loved him makes me want to climb Mt. Everest and shout to the world how special and important he was. For the past two months, I've had to be content to tell the lovebirds about him. They are, as it turns out, excellent listeners. But if you'll indulge me, dear readers, I'd like to share with you a snippet of the piece I wrote about him, because honestly without a Jed there never would have been a Jenny. In his own way, my brother inspired every story I've ever written and I never would have become who I am without him. I also wouldn't have learned how to drive a stick shift, but that's a tale for another day.

My brother was 6'6' and he wore size 13 shoes. He had a crooked smile, a mischievous twinkle in his blue-gray eyes, and he walked with a long-legged lope with his head tipped to the side as if listening to music only he could hear. His large calloused hands helped build the Boston skyline but could also tenderly cradle a baby, both were safe in his care. Despite, the amount of space he took up or maybe because of it, he went through life quietly and gently, trying not to do any harm.

That is the one thing people tell me over and over and over again. My brother was a good man, who never had a bad word to say about anyone. Not ever. Humanity in general, sure, but individuals - no. He saw people. He observed their struggles, their pain, and he hurt for them, whether it was a cashier at the local quick mart or a person on the news on the other side of the world. It didn't matter. He treated everyone he met with kindness and understanding. He knew life was hard. He knew that privilege and advantages were not fairly distributed in this world. He tried to help those who had less and those who struggled in any way he could even if it was just to see them, really see them, and treat them with politeness and respect for the moments their world intersected with his.

He had a wicked sense of humor that he delivered in quick one liners that would make you laugh so hard you'd cramp. I remember being together in the hospital for one emergency or another, and I tried to lighten the mood by saying, "Hey, quality time with the fam." He looked at me in that "are you goofy?" way he had and, in his thick Massachusetts accent, said, "More like doin' time."

A magnet for children and animals, he was their chosen one and no matter where he went, the cat sat in his lap, the dog trotted beside him, the child demanded to be picked up. I believe they knew instinctively that he was a protector. They were right.

It is well known, that my brother and I were exceptionally close. While he is Jon to most of the world, he has always been Jed (his nickname) to me. Eleven months apart, we were Irish twins, and from the time my newborn eyes clapped onto him, he was my person. Because we were always together, our names were even blended into one -- JednJenny. The original hooligans, we ran wild as children, always on the go, we loved to be outdoors, climbing trees, ice skating, bike riding, skateboarding, fishing - of course, it made him crazy that I always caught the bass while he suffered with the sunfish - still, our shenanigans were legendary, and he saved my life more times than I can count.

As we grew up and our lives put miles and time zones between us, he would often say, "No matter how many miles or hours separate us, we are always connected by an invisible cord that can never ever be broken." When he first died, I felt as if he had cut the cord and left me, but now, now I know that he was right. The bond we shared, the same bond he shared with all those he held dear, can never be broken. The cord, which is crafted out of love, is still there. I just don't know where the other end is right now, but I will. Someday, I will.

Was Jed a perfect man? No. But he was perfect for all of us who loved him. Godspeed, my brother. I'll see you on the other side where the beer is cold, the rock and roll is playing, your teams always win the championship, and you actually manage to catch the big one.

Thank you for letting me share, readers. Your love and support has meant the world to me over these past few weeks. Hug your loved ones close and tell them you love them. And if you ever happen to see a sunflower or a rosy-faced lovebird, I hope you'll think of my brother and wish him well. 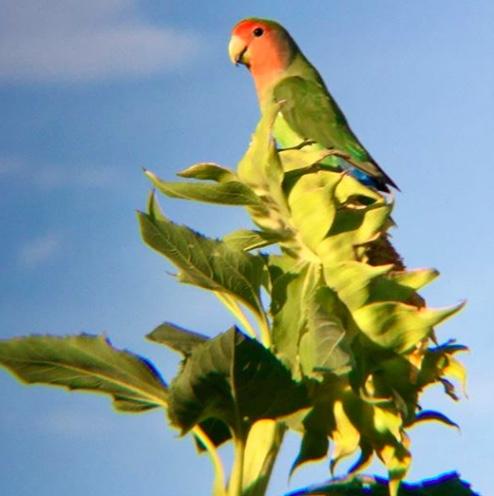