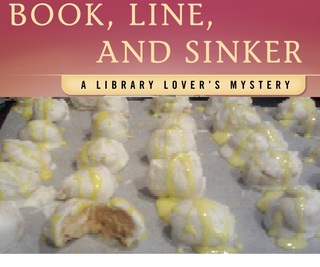 BOOK, LINE, AND SINKER will be released on December 4, 2012! I’m very excited, so I’m sharing the recipe for lemon-almond cookie truffles that’s in it (see below).

A DEAL TO DIE FOR by my alter-ego Josie Belle will be released December 31, 2012! Very excited about that one, too!

WHAT’S ON MY MIND?
Recently, when I was at a book signing, a reader approached me with a decided squint in her eye and asked, “Why you?”

What she meant, of course, is why are you published? I didn’t take it personally. I understood. I spent eight years in the trenches, trying to get published and I squinted at a fair number of authors myself while I tried to figure out this singularly unique -- read, totally whacko -- business.

Now, I’d love to say that it is my brilliance with words, my eloquence, or my own particular brand of word-bending -- sort of like a super power -- that landed me a deal. But it isn’t. It didn’t.

In fact, if you remove my bullheadedness and insane work ethic -- yes, these are requirements in this industry -- then what is left is a certain disregard for the rules, which I have come to discover is the key ingredient to becoming a successful writer, or more accurately, a successful anything.

Rebels. I love them. I love people who dance in the grocery store not caring that someone may be watching. Yes, I’ve been known to be one of them upon occasion but only if it was a real toe-tapper of a tune that they were piping in overhead. I mean, hey, if you’re going to play the chicken dance song while I’m shopping for produce you really can’t blame me for giving a flap and shake, now can you?

But back to the rebellion. Rules. We’re choking on them, aren’t we? A friend of mine says in her neighborhood's HOA, you can only paint your house one of three different colors. Really? But what if I want a purple house with pink polka dots? Someone out there just had a stroke from that visual, didn’t they? Er…sorry.

Okay, leaving aside home aesthetics for the moment, we’re still drowning in rules. At our jobs, we have to dress professionally, even though anyone who has ever worked in an office will tell you that these people behave like children, very naughty children, who would probably be a lot happier and more productive if you let them dress like super heroes and ballerinas every now and then, and no, that’s not gender specific. Just a suggestion.

From the time we’re born, the world starts sanding us down with its rules – undoubtedly, for our own good -- smoothing away our rough edges so that we don’t run with scissors but learn to play well with others, so that we aren’t home brewing from the Anarchist’s Cookbook while still in the third grade. I’m okay with that. Mostly.

But here’s the problem, we get so used to rules and meeting expectations and doing things the “right” way that we forget we learn more from our mistakes than we do our successes. Oh, and failure? Yeah, it’s good thing. In fact, it’s a great thing.

One of my favorite failures is the guy who was told after his first gig at the Opry that he “should go back to driving a truck”. Guess who? Yep, the one the only -- Elvis. Does he strike you as a rule follower? Hmm, not so much. Another fave was described by his teachers as “mentally slow, unsociable and adrip forever in foolish dreams”. I particularly enjoy that last turn of phrase. We should all be as adrip as Einstein.

See? Failure begets success so long as you don’t give up. I wrote five novels before I sold one. They were terrible, hideous, as in only good for starting fires, but I learned so much from them that I couldn’t be the writer I am now -- a work still in progress, I assure you -- if I hadn’t slogged through those baddies first. Why were they so awful? Because I was afraid to break the rules!

Here’s the ironic twist. Because I was paralyzed with self-doubt and insecurity, I frantically followed all of the insignificant rules about point of view, plot, dialogue and characterization that I had studied and fretted over, and subsequently failed at the only rule that matters. I didn’t write what I wanted to read or what anyone else would want to read either for that matter.

And here’s the truth, the stomach cramping, night terror inducing truth, if you’re going to write something worth reading, you’re going to have to break some rules. A lot of new authors get hung up on font, type size, line spacing, whether they can query one agent/editor or five at a time. Who cares? If you hand in a manuscript that grabs an agent/editor by the throat and doesn’t let go, you’re going to get a deal. Believe me when I tell you that “Yeah, you’re 50 Shades of Twilight with a Dragon Tattoo manuscript was awesome, but you used the wrong font size so we’re going to have to pass,” was said by no editor ever.

And even if you’re not an aspiring writer, it’s always good to assess and evaluate the rules that dominate your life. This is the part where my mother cringes and clutches her chest, thinking I am inciting mayhem. I am not. Wear your seat belt. Treat others how you want to be treated. But don’t be afraid to swim against the current when it’s not going in the direction you want to go.

I have two young sons, and while I drill respect for all people into them, I do want them to question authority. Sadly, they seem most comfortable questioning mine. Sigh. But the reason I do this is because of the Milgram Experiment conducted at Yale in the 1960’s. I remember being shocked when I learned about this behavior study during my undergrad days.

In a nutshell, it went like this: Participants were instructed by a person in a lab coat to shock test subjects when they got the answers to their questions wrong. Little did the people doing the shocking know that they were actually the test subjects and what was being tested was their willingness to blindly follow rules even if it meant hurting others. It made such an impression on me that I started to really think about the rules I should follow and the rules I shouldn’t.

So, here’s my two cents for what it’s worth –- about two cents exactly -- cut the tags off your pillows, submit to as many publishers as you want, self-publish if that’s what your heart tells you to do, or just go get the haircut/tattoo/nose ring everyone says you’re too old/young/straight laced for and go live a life worth living!

Directions:
Mix the cream cheese, powdered sugar, and lemon extract in a large bowl until smooth and fluffy. Then stir in the ground cookies and lemon zest until well mixed. Roll into 1 to 1 1/2 inch balls and place on a baking sheet. Refrigerate for about 1 hour. Dip balls in melted almond bark, letting excess drip off. Place in mini cupcake papers and cool in fridge until coating hardens. Because of the cream cheese ingredient, store in refrigerator. Serve either at room temperature or chilled.

To find out more about what is happening with me, you can find me at my website www.jennmckinlay.com or you can find me on facebook or twitter. My next newsletter will be out December 2012!