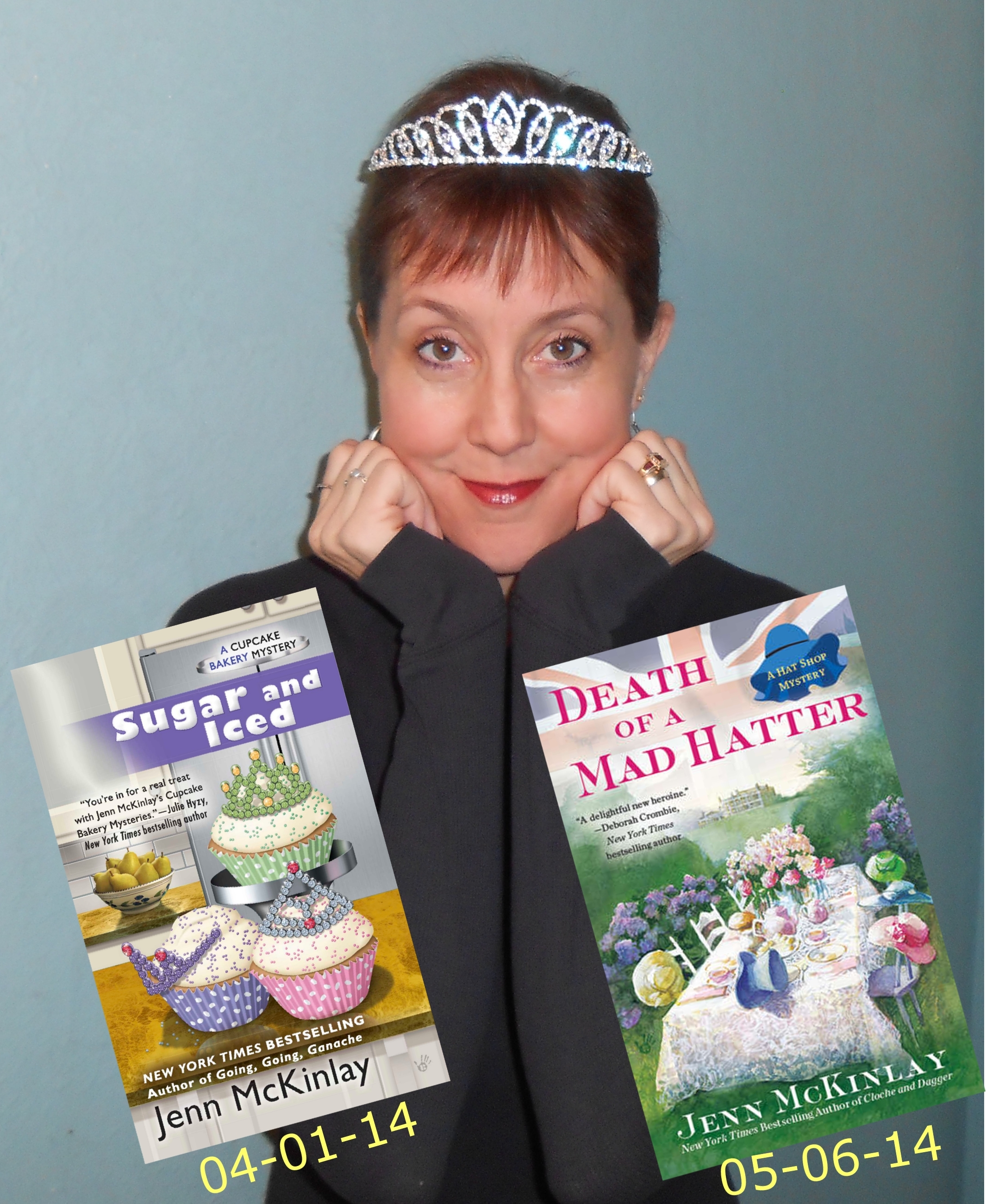 SUGAR AND ICED will be released on April 1st (April Fool’s Day is kind of perfect for our zany cupcake girls).

DEATH OF A MAD HATTER will be released on May 6th (just in time for Mother’s Day).

The final contest to win a signed advanced reader’s copy of SUGAR AND ICED and a tiara is happening now and ends March 15th! Go to: www.jennmckinlay.com to enter! Drawing will be held Mar 15th.

Coming in April, there will be two contests to win advanced reader’s copies of DEATH OF A MAD HATTER and a sweet Alice in Wonderland coffee mug! Stay tuned!

Jenn will be at the Tucson Festival of Books on Mar 15th and 16th.

Jenn will be attending Left Coast Crime in Monterey, CA from Mar 20th-23rd.

Jenn will be signing both books at the Poisoned Pen on Saturday, May 10th at 2 pm with her friend Hannah Dennison who will be signing her new mystery MURDER AT HONEYCHURCH HALL.

WHAT’S ON MY MIND?

Cupcakes are my weakness. It’s true. Shocker, I know. When I was an adolescent, going through that awkward, moody, let’s see if I can make everyone around me as miserable as I am stage, I refused to eat anything but cake. Yes, I’m serious. And I’ll bet your kids are looking pretty good to you right now. You’re welcome.

My mother, who is surely up for sainthood, took me to the doctor. I was skinny to the point of looking like a refugee from a drought ridden nation, which is what happens when you’re freakishly tall and you hide your dinner between your chair cushion and the wooden seat every night for a week or two.

The doctor gave me a physical. There was nothing clinically wrong with me. My mother raised her hands in exasperation and wailed that she didn’t know what to do as all I would eat was cake. The doctor calmly looked at her and said, “So, let her eat cake.” My mother was staggered. The doctor, a lovely lady doctor I might add, said, “What’s in cake? Eggs, milk, flour, really, is it so bad? Plus, it might fatten her up a bit.”

My mom let me eat cake until, as you can imagine, I got a bit sick of it. Suddenly, I was craving meat and potatoes and cauliflower and peas. Not zucchini, though, I still loathe zucchini and there’s a good reason but it’s a story for another day. Anyway, allowed to ride out my hormonal whatever the heck that was by eating all the cake I wanted, I soon put it in perspective and realized that not only did I want to eat cake I wanted to bake cakes, too.

And that is when my love affair with baking began. I broke out my mom’s Betty Crocker and Good Housekeeping cookbooks and went to town. I started with cookies, moved my way up to cream puffs, quick breads and then cakes. For a while there, I baked Bundt cakes exclusively, but I slowly began to embrace the two layer. A few Christmases ago, I even mastered the checkerboard cake. When you slice it, the three layer cake is in alternating colors like a checkerboard -- good for those chocolate or vanilla dilemmas.

When I started writing mysteries, the idea of setting a series in a cupcake bakery was as organic as making my own vanilla, another new trick I’ve learned. Thank you, Krista Davis. I consider time spent in my kitchen, working out my recipes, not only therapeutic but it’s also the research and development portion of the books. Thankfully, my family is always willing to be taste testers just like they’re willing to traipse around London and help me research the London hat shop mysteries. Living with me is a hardship, I know. Well, it is if you expect dinner on time!

Now to celebrate the release of SUGAR AND ICED and DEATH OF A MAD HATTER, I’m going to share a recipe from the April book. This is a favorite for spring as strawberries are plentiful (and on sale) in AZ!

Pretty in Pinks: A strawberry cupcake with a dollop of vanilla buttercream rolled around the edges in bright pink sprinkles.

Directions
Preheat oven to 350°. Line cupcake pan with paper liners. In a large bowl, cream butter and sugar until light and fluffy. Add eggs, one at a time, beating well after each addition. Beat in vanilla. In a medium bowl, combine flour, baking powder and salt; add to creamed mixture alternately with milk, beating well after each addition. Lastly, fold in the chopped strawberries. Fill paper-lined muffin cups two-thirds full. Bake 18-22 minutes or until a toothpick inserted in center comes out clean. Cool completely. Makes 12 cupcakes.

Directions
In a large bowl, mix the butters and vanilla until smooth. Gradually add sugar, one cup at a time, beating on medium speed. Scrape sides of bowl often. Add milk and beat at medium speed until light and fluffy. Makes three cups of icing.
Pipe or spread frosting onto the cupcakes. Pour bright pink sprinkles onto a plate or a bowl and carefully roll the edges of the frosting in the sprinkles before the frosting sets.

Happy spring, everyone! And because I’m sure I don’t say it nearly enough, thanks for being the BEST readers EVER!
Jenn