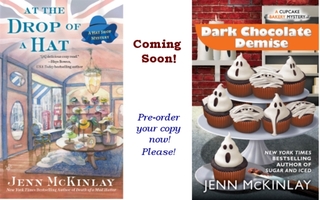 BOOK NEWS: AT THE DROP OF A HAT the third London hat shop mystery was released on Feb 3rd!!! Always exciting to celebrate a book birthday. Next up will be DARK CHOCOLATE DEMISE the seventh cupcake bakery mystery out on April 7th!!

EVENTS: Come be my Valentine! I will be signing AT THE DROP OF A HAT on Feb 14th at the Poisoned Pen at 2 pm. Joining me will be one of my fave women's fiction writers Beth Kendrick. And, yes, there will be cupcakes and chocolates!

CONTESTS: To make it simpler, I now have a Wednesday Giveaway every (yes, you guessed it) Wednesday on my facebook page. Today's is a really good one as I'm giving away a signed AT THE DROP OF A HAT as well as signed books by Kate Carlisle and Eva Gates. Don't miss out!

WHAT'S ON MY MIND: I recently had a reader ask me "Why do you do what you do?" Meaning, I think, what in my crazy addled head ever made me think that writing was a good way to make a living? Quite simply, all of it. I love every aspect of the writing gig. I love playing with my imaginary friends, wracking my brain to come up with twisty turny plots, and tinkering with words and using them in ways no one has thought to before, or at least, I try to do all of those things.

In my most recent book, the research component of writing was where I expended most of my energy. When researching the plot for AT THE DROP OF A HAT, I felt the need to go to London, a hardship I know. While it is certainly possible to write a book about a foreign setting when you haven't been there – thank you, Google Earth – it is infinitely better to go there in person.

It is the little things that make a story come to life, at least for me. Buying a baguette and a hot chocolate in Hyde Park on a chilly morning, riding on the top of a double deck bus in the front row on a rainy day, renting a Barclay bicycle from one of the many stands in the city, all of these things were small life moments I enjoyed whilst (love that word) I visited London that added texture and flavor to the setting I was writing.

There is no substitute for hearing the recorded voice tell you to “Mind the Gap” when you step on the Underground, or being handed a wooden spoon with a number on it at the pub so they can bring you your order of beef stew in a Yorkshire pudding bowl to be washed down with a Fuller’s Ale. Bliss.

Probably, my favorite research was visiting Portobello Road. Mim’s Whims, the hat shop that Viv and Scarlett own, is set on the famous street in Notting Hill and I spent hours wandering its shops, noshing my way through the Saturday market, admiring the neighborhood and soaking up the atmosphere like a sunflower turning its face to the sun.

When I sat down to write, I didn’t know what moments from my trip would insert themselves into my book. I just let it happen. As of now, I’m still waiting for the episode when a lovely elderly British woman collided with my son in a crosswalk and cried out, “Oh, my little sausage!” to plop itself into a future book. I have no doubt it will, especially since my son has forbidden me from calling him “my little sausage” anymore.

So, if you’re looking for a taste of London here’s a glimpse of the plot of AT THE DROP OF A HAT so you can decide for yourself whether you want to join Viv and Scarlett for their latest mystery. Ariana Jackson arrives at Mim’s Whims bearing an old hat box. Inside is a wide-brimmed bridal hat that was definitely made by Mim, Scarlett and Vivian’s grandmother, over thirty years ago. Ariana is about to be married and she wants Viv to restore the hat and veil to its original glory so that she can wear it at her own wedding.

Viv is delighted to take on the job, it means so much to her to refurbish one of Mim’s original designs. Unfortunately, contacting Ariana with the estimated cost becomes difficult as she never answers her phone. Finally, Scarlett goes to visit the young woman at her place of work. When she arrives at the barrister’s office in Kensington, she finds Ariana in the alley, standing over the body of her dead boss who looks to have fallen to his death. The police think the man was pushed. Scarlett refuses to believe Ariana is the murderer. It is now up Scarlett and Viv to find the real killer before Ariana’s future is boxed up for good.

Happy Reading! And thanks so much for going on this journey with me.
Jenn 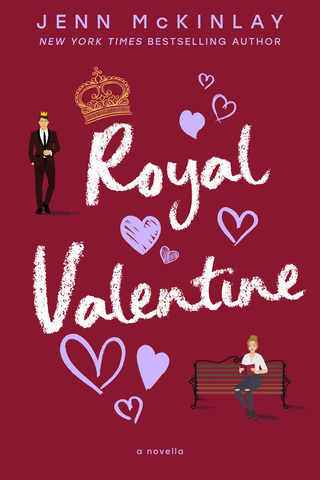