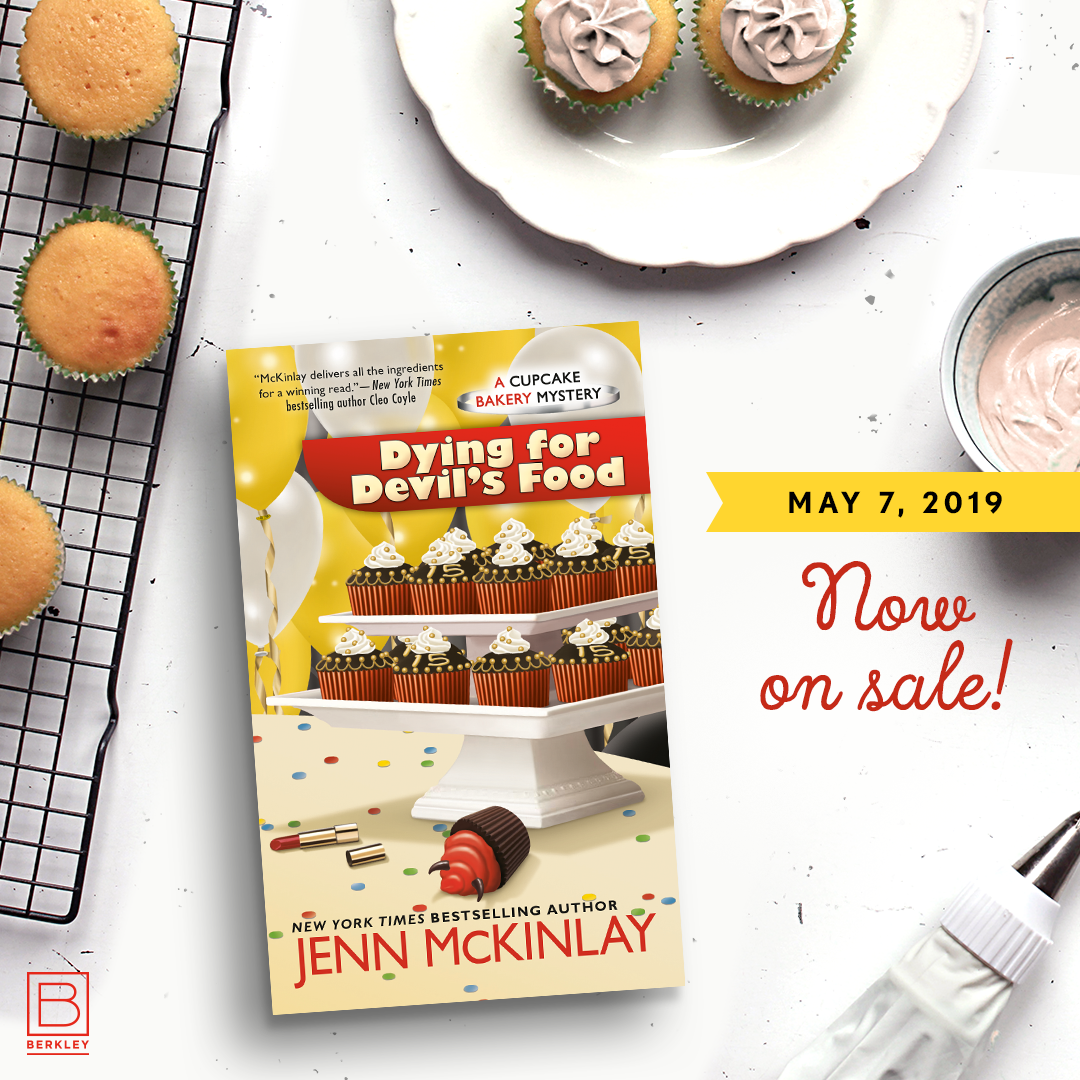 BOOK NEWS: DYING FOR DEVIL'S FOOD is out TODAY!!! Mel and Angie are headed back to high school! I am just thrilled to have written the 11th Cupcake Bakery Mystery and am looking forward to writing the 12th real soon.

WORD TO THE WISE, a Library Lover's Mystery, will be out in September (wedding plans for Lindsey and Sully) and following in October will be my romantic comedy THE CHRISTMAS KEEPER (a heroine who loathes Christmas and a hero who loves it - crazy Christmas sweaters, anyone?)!

WHAT'S ON MY MIND: Bullies. No one likes a bully. When I started writing Dying for Devil's Food and I knew Melanie Cooper was going to be confronted with the opportunity to face down her old nemeses, I had to think for the first time about why her school tormentors were they way they were. What made them so vicious and mean? This is Character Development 101 – figure out your character's motivations because no one is a jerk for no reason. At least, I hope not.

Cassidy Havers and Dwight Pickard were the two students most responsible for Mel's misery in high school. Cassidy nicknamed her "Melephant" and did everything she could to torture Mel about her weight, her looks, and her shyness. But why? Why would someone go out of their way to make another person so miserable? This is one of the many things I ponder in life because I just don't get it.

Personally, I didn't have much of a frame of reference for bullying because I was pretty lucky in school in that I can't remember being bullied. Oh, sure, at six feet tall, I was teased just like the kid with the sticky out ears, the girl with the super thick glasses, and the boy who was so skinny he looked like he was made of string. But while I was teased for my height I never felt bullied, not like Mel did, so what made Cassidy so mean to her?

"Hurt people hurt people." I read this sentence in a discussion about bullying awhile ago and it's always stuck with me. It's true, a person who is hurting will strike out and hurt other people. Knowing this, I thought long and hard about why Cassidy had wanted to hurt Mel so much back in high school. To my surprise, this added all new twists and turns to the plot that I hadn't expected but was delighted to explore. I'd say more, but I don't want to give away too much.

The other element of the story that surprised me was an unexpected reconciliation with one of her former bullies. When one of her high school tormentors grudgingly helps Mel track down the killer, it was an opportunity for the characters to discover each other beyond the persona of bully and victim. But after so much pain, could two people actually find friendship? Again, I can't say too much but how does a person forgive someone for making them miserable during the most vulnerable years of their life? You'll have to read the book to find out!

Here's a longer description of Dying for Devil's Food to whet your appetite: Melanie Cooper has zero interest in catering her fifteen-year high school reunion, but Angie insists it's only right that they bask in the success of Fairy Tale Cupcakes--and Mel's engagement to the delicious Joe DeLaura is the cherry on top!

Everything is going better than expected until Cassidy Havers, resident mean girl and Mel's high school nemesis, picks a fight. No longer willing to put up with Cassidy's bullying, Mel is ready to tell the former homecoming queen to shut her piehole and call it a night. But as Mel and Joe prepare to depart, Cassidy is found dead in the girl's bathroom, next to a note written in lipstick that points right to Mel--making her the prime suspect.

Now, Mel must follow the clues to find the real killer and keep her reputation from being frosted for a crime she didn't commit.