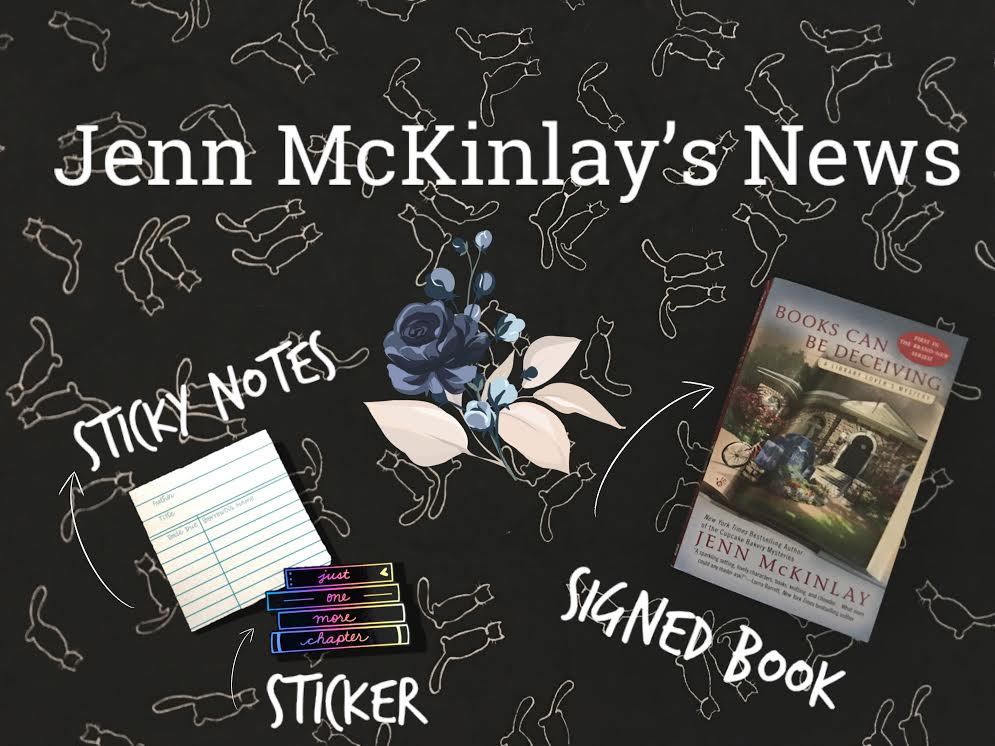 The April Giveaway for Library Lovers!

Spring is here! Okay, so Arizona is rolling right into hot summer, and I saw that the northern part of the country got snow this week, still somewhere someone is enjoying a beautiful spring day, right? RIGHT?! LOLs.

Book News: FOR BATTER OR WORSE, the 13th Cupcake Bakery Mystery, comes out on 05-04-21!!! Will Joe and Mel finally tie the knot? Order it today to find out! Fresh Fiction said this: "Catching up with old friends never felt so good." 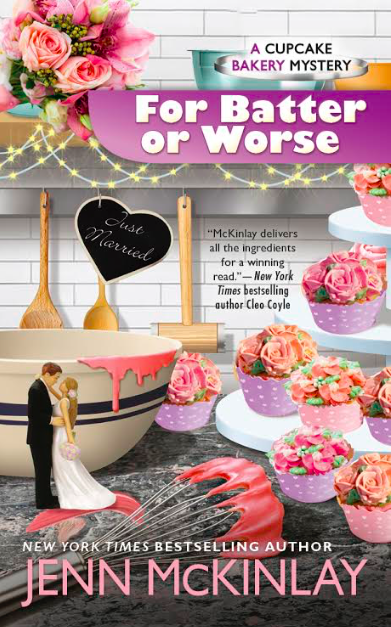 Giveaway: This month's newsletter giveaway is a signed copy of Books Can Be Deceiving, a pad of library sticky notes, and a Just One More Chapter sticker.  One randomly chosen subscriber will win all the loot, so check your email! Notifications will go out on Monday, April 26th!

There are also monthly giveaways on my Instagram @mckinlayjenn and an independent FB page called Fans of Jenn McKinlay (super social and fun) and my assistant Christie always has loads of promotional giveaways on the FB page McKinlay's Mavens. Don't miss it! Join up TODAY!

Events: To celebrate the release of For Batter or Worse, I am going live on the indie FB page Fans of Jenn McKinlay at 8 PM EST on May 4th (May the 4th be with you – yes, I had to say it). I'm also, going live on the Poisoned Pen FB page on May 1st at 4 PM PST with my friend Paige Shelton, and again live at Murder by the Book on May 6th at 7 PM CST with Terrie Moran Farley and Mia P. Manansala.

Pre-Orders: I have two more books available for pre-order right now. WAIT FOR IT, my second women's fiction rom-com available on 08-10-21!!! Everything was fine (not really) until she moved in... 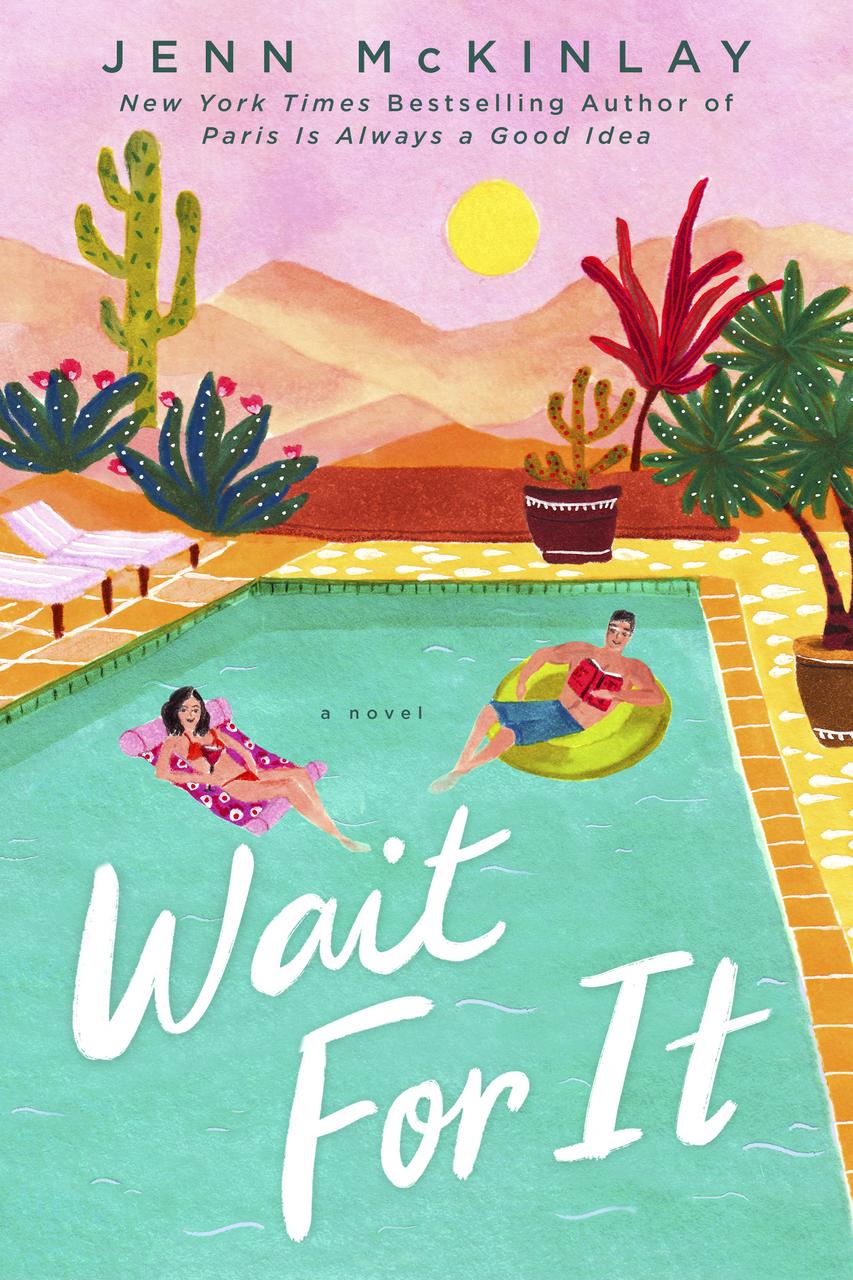 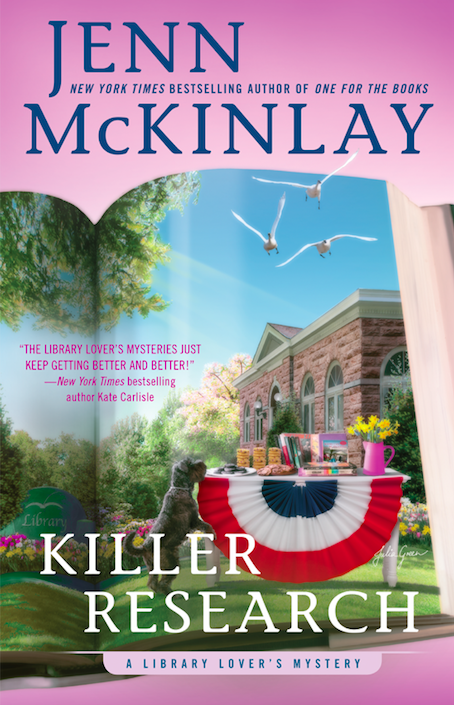 I know times are tough but pre-orders are literally what keep authors in business. Publishers will keep series alive when the pre-orders are significant. Even if you just ask your local library to pick it up for you, that's a huge help!

If you are a pre-orderer, Christie has crafted an insanely awesome giveaway for this summer's rom-com release -- Wait For It! Just send your proof of pre-order for Wait For It to: jennmckinlaypromotions@gmail.com and she'll pop the exclusive desert wishes bracelet into the mail to you! 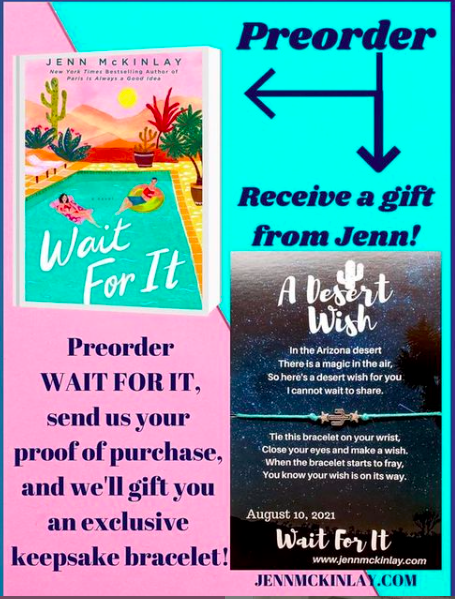 What's On My Mind? Humanity. Hub and I had to stop at the department store the other day. I had ordered a jacket online that came promptly but with the anti theft tag still on it. Sigh. It rather defeats the purpose of ordering online if you have to go to the store anyway, but I digress.

We parked and began to walk toward the main doors. People were coming and going – hurry, hurry, hurry – as we do. But there was one man who was crouched down, peering at the ground, clearly in distress. He was a big man, shaved head, lots of tattoos of dubious origin, but I didn't see any of that as it was clouded by the anxiety pouring off him in waves.

As we got closer, I asked, "Are you all right? Did you lose something?"

He looked up at us and even from behind his mask it was clear that this big guy was about to cry.

"I lost an earring," he said. Then he took a jewelry box out of the store bag and opened it. There were three sparkly diamond earrings in it and one hole where one had gone missing. Eek!

Hub and I immediately started searching. The man showed us where he'd dropped the box, all the while saying, "I don't know what I was thinking. I don't know why I opened it. It's a gift. Why didn't I leave it alone?"

The poor guy was really beating himself up. We searched and searched. No luck. Cars were driving around us, making me freak out (on the inside) for fear that they might drive over the missing earring. It was beginning to look like a lost cause. I was deeply bummed but not nearly as disappointed as the man.

And then a super cool thing happened. People stopped hurrying around us and instead, they paused and joined us. One old codger, cupped his ear and yelled, "We're looking for what?" Another young woman gasped when the man showed the box and told the newcomers what had happened. We all agreed that the earring must be found. Soon, we had a crew of every sort of person you could imagine – young, old, man, woman, etc. – and we were all completely invested in solving this man's dilemma.

We gingerly walked around and around the parking lot, wondering aloud how far a diamond could bounce. And then, finally, our guy said, "I found it!" And sure enough, it was face down in a crack in the pavement, but it was okay! He fished it out and put it back in the box. When he looked up, he was so relieved and so grateful to all of the people – there were ten of us by now – who had paused in their day to help him, a stranger, that now there were happy tears in his eyes. There were a few in mine, too.

It made me hope that this is the world we are going to wake up to when we come out of our isolation for good. A world where we've missed human interaction so much that we actually see each other, really see each other, and when someone is in distress, we stop what we're doing and take the time to help. I know that's the sort of world I want to be in.

Happy Reading! And, as always, thanks for being the BEST readers ever!